Photo Of Orb Over Highway Near Salt Lake City, Utah 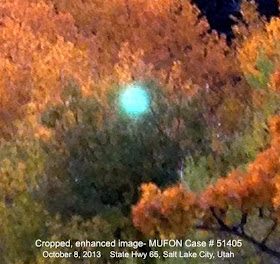 
This report was submitted to MUFON.
The report is unedited.

Please note: I cropped, enlarged and enhanced the object in the photo above, from witness' photo.   Please refer to photo links at bottom of this post
The orb appears to be a plasma ball, possibly under intelligent control, i.e., probe?  -Sunny


MUFON Case #51405
Location of Sighting: Salt Lake City, Utah
Date of Sighting:       10-08-2013
Object Shape:            Orb
Summary: Glowing white light approx size of basketball at treetops; took photo #1 them orb switched to other side of road within seconds for photo #2; appears green in photos although was white to the human eye

Report:
I was driving southbound on Utah state road 65 from the East Canyon Reservoir area (Wasatch mountains) toward Salt Lake City/Interstate 80 enjoying the autumn leaves on Oct. 8th, 2013 approximately 430-5pm MST. Relatively few cars were on the winding mountain road and the sky was very overcast. While driving on a fairly straight portion of the road, a glowing white light caught my eye. The spherical object was approximately the size of a cantaloupe or basketball and was hovering stationary near the top of a large tree. The object seemed to shimmer white light yet did not blink lights and did not change light color. It was a glowing ball of white transparent light. I quickly braked and grabbed my iphone (which was in camera mode as I had been stopping periodically to take pictures of the autumn leaves) and snapped a picture of the glowing orb. Mere seconds later, the orb appeared on the opposite side of the 2-lane road at approximately the same height off the ground yet I did not witness the orb move from one location to the other. It was simply as if it "disappeared" as it moved between locations within seconds. I quickly snapped a second picture before the object simply was no longer visible. No longer seeing the object, I proceeding in driving toward my destination. Once in SLC, I stopped to look at the two pictures of the object I had taken. I was surprised to see that the object (which had appeared bright white to my eyes at the time I observed and photographed the object) appeared glowing GREEN, not white, in the two photographs! The lighted object I witnessed and photographed was not a reflection from another vehicle or street sign, nor was it a malfunction of my iphone camera (inasmuch as I have taken literally hundreds of photos of this seasons autumn leaves on the iphone at varying times of the day and early evening and have never seen a reflective green spherical object inadvertently appear in any of them). The green orbs shown in the attached photographs are what appeared to the naked eye as white glowing orbs. I do not know what it was I witnessed and photographed; I do however know I successfully captured whatever it was in two valid photos.